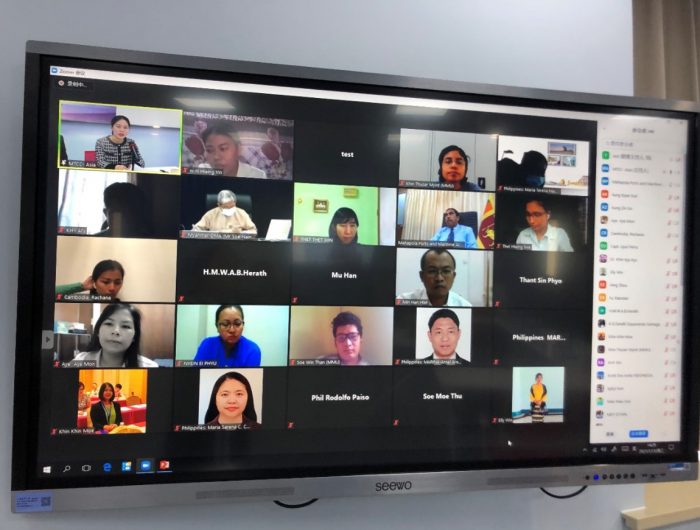 As part of MTCC Asia’s continuing efforts on the promotion of GHG emissions reduction from the maritime sector, representatives of stakeholders from the region had a lively discussion around the energy efficient technologies and operational measures at its Regional Conference held on 13-15 January 2021. The Conference, attended by over 60 participants from maritime authorities, industry academia and technology providers in Asia, addressed the outcomes of IMO’s MEPC 75, key points of the fourth GHG Study Report, and latest practices on ship energy efficiency solutions.

In his opening remarks, Prof. Shi Xin, Executive Director of MTCC-Asia and Vice President of the Shanghai Maritime University (SMU), highlighted the need for the international shipping industry to promote cooperation to support IMO’s GHG Strategy, and hoped participants could learn, share, and exchange best practices at the regional event.

Capt. Soe Naing, Director-General of Department of Marine Administration, Ministry of Transport and Communications, pointed out that Myanmar has benefited from the in-depth collaboration with MTCC Asia and would continue to be engaged with active response to the IMO’s GHG agenda. Technical officer of MTCC Asia Myanmar Branch Office shared the strategies and measures Myanmar has been taken to support GHG mitigation of the industry.

A virtual technical tour around the SMU Engine Room Lab and Duel Fuel Engine Lab was provided to introduce the research projects being taken on improving ship energy efficiency and GHG emissions reduction.

Being part of the agenda, the Women in Maritime special session was addressed in an effort to add values to the ongoing discussions aimed at promoting gender equality. Ms Helen Buni from IMO gave an update on IMO’s contribution to increasing visibility and recognition for women through its global network and capacity building activities. A short film produced by MTCC Asia was presented to show how maritime education in China has successfully supported the integration of women in the maritime sector. Watch the film here.

The participants in the Conference realized the necessity of tailor-making strategies and technical measures for GHG reduction actions in different countries and agreed upon the further co-operations therefor.

Under the auspices of IMO and the European Union, the MTCC Asia Regional Conference is being held for its third consecutive year, to build capacity for the uptake of energy efficiency technologies in the shipping industry of the region.