Implementation of Maritime Climate Action in the Caribbean

Captain Sukhjit Singh - Summary of options and Impact on the region

Fulcrum - The use of RPAS (drones) to support emissions monitoring 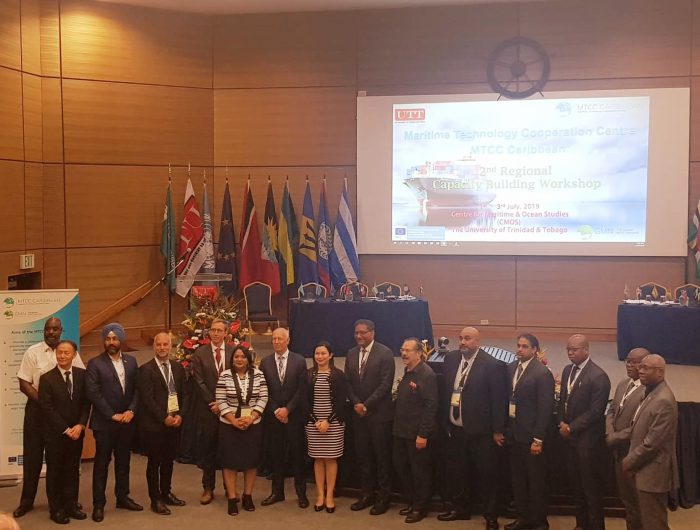 Committing to decarbonization in the Caribbean maritime sector

Government and private stakeholders have expressed pledged their support for climate action in the Caribbean, with a focus on decarbonizing the shipping sector, during a regional workshop on Capacity Building for Climate Mitigation in the Maritime Shipping Industry, held at the Chaguaramas Campus of The University of Trinidad and Tobago (1-3 July). The workshop, the second for the region, was hosted by the Maritime Technology Cooperation Centre (MTCC) Caribbean – one of five regional centres established under the IMO-led, European Union-funded Global MTCC Network (GMN) project.

Participants were updated on pilot projects completed by MTCC-Caribbean, including a voluntary regional online reporting system to track energy efficient technology and fuel consumption onboard ships within the Caribbean. This has enabled the completion of baselines and databases, including for greenhouse gas emissions; for Energy Efficiency Operational Indicator (EEOI) for ships calling at Caribbean ports; for energy efficient technologies used on board ships calling at ports in the Caribbean; and for the type of fuel consumed by vessels within the region. Establishing the baseline is key, in order to then move forward with reducing emissions.

Following discussions, many participants acknowledged the need to support and sustain the MTCC Caribbean beyond the GMN project duration. A working group was established to address identified challenges, including securing funding and obtaining full political support at the national and regional levels. The MTCC-Caribbean is seen as having a key role in propelling the Caribbean forward with  decarbonization in the shipping sector, in line with the IMO initial GHG strategy.

The workshop was attended by more than 100 international, regional and local participants, from  Government ministries and agencies, including Maritime Services Division, Ministry of Trade and Industry and Ministry of the Environment and Water Resources; maritime administrations of various Caribbean States; major ports including Port Point Lisas (PLIPDECO) and Port of Spain; private sector stakeholders (including BP Trinidad and Tobago, Caribbean Shipping Association Carnival Corporation, Energy Trinidad Limited, Fulcrum Maritime Systems Ltd, Methanex, NiQuan and Shipping Association of Trinidad and Tobago, and); the Caribbean Marine Environment Protection Agency (CARIBMEPA) and the Women in Maritime Association, Caribbean (WiMAC); and the Research Institutes of Sweden (RISE).

Port of Spain, Trinidad and Tobago

Port of Spain, Trinidad and Tobago